Getting into the swing

It has been a while since I posted, and in fact quite some time since I have been foraging for myself. Since Mary died in December, I haven’t been so focussed, and I suppose I have been coasting along and working and birdwatching and stuff, but not really getting around to proper foraging. There’s still a couple of bags of marmalade oranges waiting to be transformed, so that’s on my mind.

However, this morning I took advantage of lovely crisp weather and headed for my nearest tract of wild land at Lagan Lands East, with the intention of making some nettle soup. I misjudged things somewhast, as the new growth of the nettles is just starting to show above ground. Not wanting to waste the opportunity of being in the zone and getting some edibles, I was able to pick plenty of other stuff, and ended up making “nettles and other greens soup”. 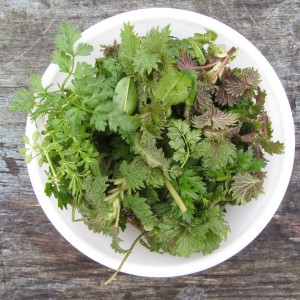 My haul included some nettles, but also golden saxifrage, goosegrass, cow parsley, bittercress and sorrel – the soup was lovely.

Even though the nettles weren’t putting in much of an appearance, there was plenty of new growth appearing, and as long as I wasn’t picking where dogs were likely to have been peeing, etc., I had plenty to choose from. I did notice that there were quite a few hawthorn bushes in leaf – way too early by about 6 or 8 weeks – must be a variety sourced from a south of England or continental nursery. Having said that, with climate change they may now posess quite an advantage over their local brethren. 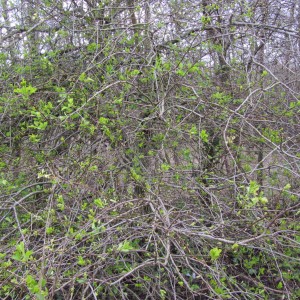